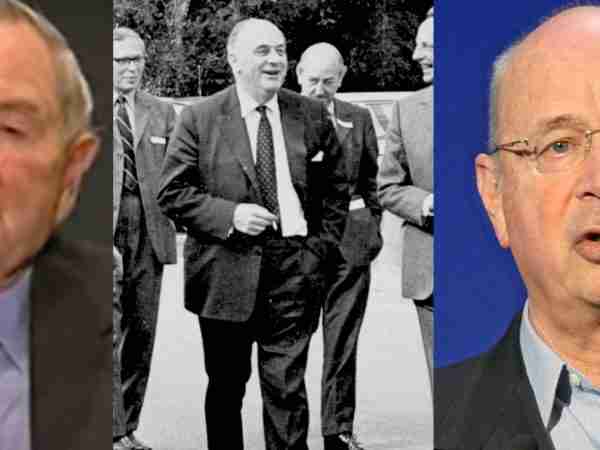 Narratives continue to be ended at the moment.

As are many conspiracy theories.

Many of which are now turning out to be true and not bull crap.

The Rothschild and Rockefeller families of course are still around.

Amid the war and pandemic before this.

Many now are legitimately asking is this World Economic Forum headed by a German based in Switzerland who no one elected, Klaus Schwab, part of something bigger.

Particularly after the French President yesterday called for a global order.

Which no one wants.

A world government to control all aspects of human lives in complete control.

By a one world government State.

Maybe in 50 years time a world leader sometimes known as but not limited to as an ‘Anti-Christ’ in this regard will be brought along.

Maybe he will be instructed to be a very charming individual and told to have ’empathy’ (bull crap word.)

Only half way through his reign to be nearly killed.

Then to turn into the worst man in history after.

Maybe none of this means anything.

Only this week front man Schwab has been doing the rounds again.

During the Russia Ukraine war.

Although this goes way back this always an interesting watch:

What they fail to mention is there have been somewhere around 117 billion humans on this planet since the beginning of time, it is said.

Yet you never hear the above mentioned much.

Why do you think that is?

Total Socialism is too close to Communism.

The above shows the dangers of it.

Think what you want about Jones but Russo was one of the most brilliant, intelligent people of his time.

Keep in mind that Russo knew he was coming to the end of his life at the time of the above documentary.

Maybe this will all mean nothing to you and that’s okay too.

Only this week Manchester United Football club got involved with a company called the Raine Group (New York but loads of other places in the world being kept an eye on – most of them are probably okay though – just coincidental for now).

Remember the Glazers. That family.

Rothschild is acting as an exclusive family financial advisor to the Glazer family on United’s own site.

All this amid the Russia Ukraine war.

Are you paying attention yet?

Obviously the Rothschild and Rockefeller family members of today’s times could easily, without hesitation, be wiped out.

At the drop of a hat.

Up until now however surely many have just being keeping an eye on them for now, letting them do their bidding up until now.

Maybe some are stronger than ever now and have just been chilling, keeping an eye on some of these bad people in all countries at a time of war in the world at the moment – and could get rid of any of these elites easily, without effort, if some so chose to do so.

Just to keep an eye on them.

In all the countries they are in. All their offices and all their family homes.

Watch the Glazers and the above movements on the United situation.

You just never know what the future holds.

Take nothing for granted.

All the talk of asteroids and aliens for instance lately.

All of us humans just the same. Passing though this short time on Earth.

In the big picture.

Power to the people.

There are no markets without people.

This current market is indicative of the times we are in.

The Russia Ukraine war and pandemic before it used as part of something bigger – maybe.

We’ll leave that up to you.

Ukraine winning the war and their freedom can mark the start of a new model for democracy worldwide.

In all nations one day.

America was founded as a Republic of which democracy can exist in too.

We are put on this Earth to be the best that we can be to fulfil our God-given potential.

There is something there for everyone.

There is space for everyone.

Don’t just go along with everything always.

Communism is so dangerous.

That interview is eye opening above.

Digital euro and digital dollar being talked about.

By the EU and US government.

FTX collapse tied to the democrat party only last week.

Tells you a lot about Biden. The above documentary tells you how criminal a place Delaware is in the world too.

Chip manufacturing plants turned out to be true as well.

Look at all the pandemic trace and track technology last few years.

And the chips being developed at the moment.

They already have them in China.

That’s where the financial aspect is being planned currently, maybe.

Where the real action is maybe.

Maybe Russia cannot be totally removed from the banking system yet.

Remember Putin shaking hands with the WEF Klaus guy above?

Maybe that’s what that was about.

Doesn’t stop the Moscow Stock Exchange being targeted though.

While Russo might not be right about everything above.

He could be right about most of it.

Or some of it.

Photo: Ukrainian Fire Turns On The Lights At Night

Fear is a weapon of mass destruction used by tyrants.

Inaction is a weapon of mass destruction.

All in all, tyrant Putin must be removed from power – someone else put in instead in Russia.

To bring about dialogue to end this war.

Or else Russian forces depart Ukraine.

One or the other.